All Collections
Advertiser
General
What are the pricing models in the Self-Service system?

What are the pricing models in the Self-Service system?

In PropellerAds we understand the value and peculiarity of each unique campaign. That is why we would like our partners to benefit as much as possible by running a flexible approach to the pricing models and ad formats.
We provide three ad formats: Onclick, Push Notifications and NativeAds, that work over different pricing models.

You can choose the most advantageous option for each campaign individually and choose one of four available pricing models for our advertisers: CPM, CPC, SmartCPM and CPA Goal 2.0. 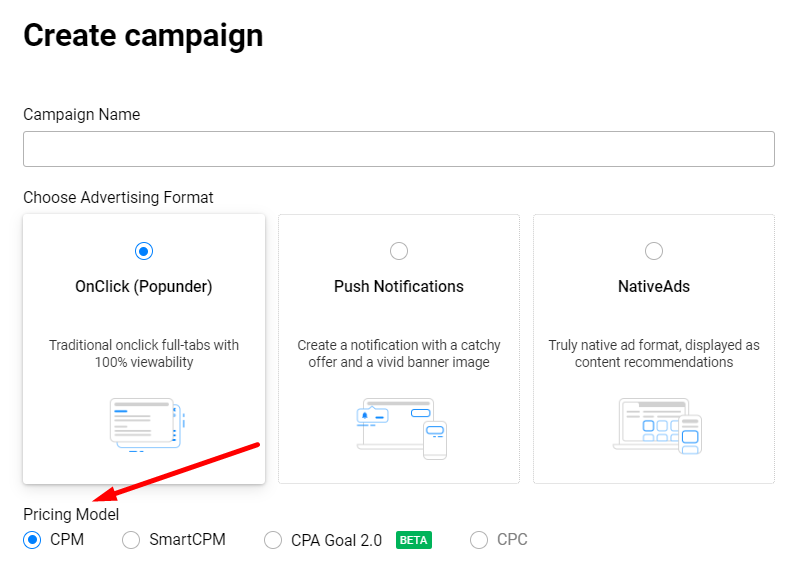 Let’s review all four models so that you can choose the most suitable one based on your campaign’s goals.

You can launch either a CPM or a SmartCPM campaign.

A CPM campaign is a perfect choice if you are a newcomer in the advertising business. Traditional CPM bidding implies the same price for traffic from all placements (zones) which fits an ad campaign targeting.

SmartCPM pricing model is based on an algorithm that automatically finds the best possible prices for each ad placement and sets bids for you 24/7. It is a perfect option if you would like to create a fully-optimized campaign because performance of various placements may vary dramatically for a particular campaign but you will be in control of that. SmartCPM pricing is a good choice in case you would like to be in control of the outcome of your campaign.
Please refer to this article about how the SmartCPM algorithm works.

With CPA Goal you are getting campaigns optimized to drive conversions at a certain cost; automation without manual interference and spending extra money on traffic that is not effective or too expensive.

To learn more about CPA goal, please check this article.

Another bidding model is CPC. You will get charged only when someone clicks on your ad. It is also one of the most beneficial bidding models for advertisers who know exactly how much they are willing to spend. This way, you are getting full control over your budget. In other words, with CPC you spend your campaign budget only on impressions that lead to clicks. When a user clicks on your ad, they’re taken directly to your website, where they can be converted into a customer.

If you want to run a performance-based campaign you should initiate a CPA Goal 2.0 campaign. CPA Goal 2.0 is an auto-optimization technology performed according to the required price per conversion. The algorithm is able to predict what traffic slices are most likely to drive quality conversions at the desired price.
This technology is built atop of CPM bidding, and advertisers are paying for impressions, while the system is finding converting traffic according to the desired CPA and targeting.

You can learn more about CPA Goal 2.0 campaign here
.