CPA Goal – an auto-optimization tool that helps driving conversions at the target price you set. The algorithm is able to predict what traffic slices are most likely to drive quality conversions at the desired price (slice=Zone+GEO+OS in Onclick campaigns and Zone+GEO+OS+Creative in Push and Interstitial).
It largely increases campaigns efficiency while saving your time you would normally spend analyzing and optimizing your results.

With the "CPA Goal" bidding enabled you will still pay for impressions/clicks, while the system will automatically optimize your campaign in order to deliver conversions with the CPA you set.

How does it work?

CPA Goal is a new generation of auto-optimization tools, based on machine learning and big data. So each CPA Goal campaign goes through the testing period, during which the algorithm tests ad placements and analyzes their conversion rate (CR) data. The algorithm does it to set up an efficient CPM bid. That means, in real time, the system decides on the most effective CPM bid based on similar campaigns CPM bids and expected traffic volumes.

Based on the test results, the system optimizes auto-bidding strategy in order to get conversions at the desired price, drive more relevant traffic and cut off inefficient traffic.

While called CPA Goal, the algorithm is actually built on the CPM/CPC bidding. This means that you’ll be billed by CPM/CPC, but the system will select the most effective traffic based on the desired CPA.

The necessary traffic for your campaign is selected according to several factors such as GEO, zone, OS version, browser, and so on. The system does it precisely, so there is no need to manually remove poorly performing zones from your campaign (but you can still launch the campaigns with your black list).

To start using CPA Goal you should check that your S2S (postback) tracking is set up. Without it the algorithm won't be able to get the conversion data.

How to set up and launch the CPA goal campaign? 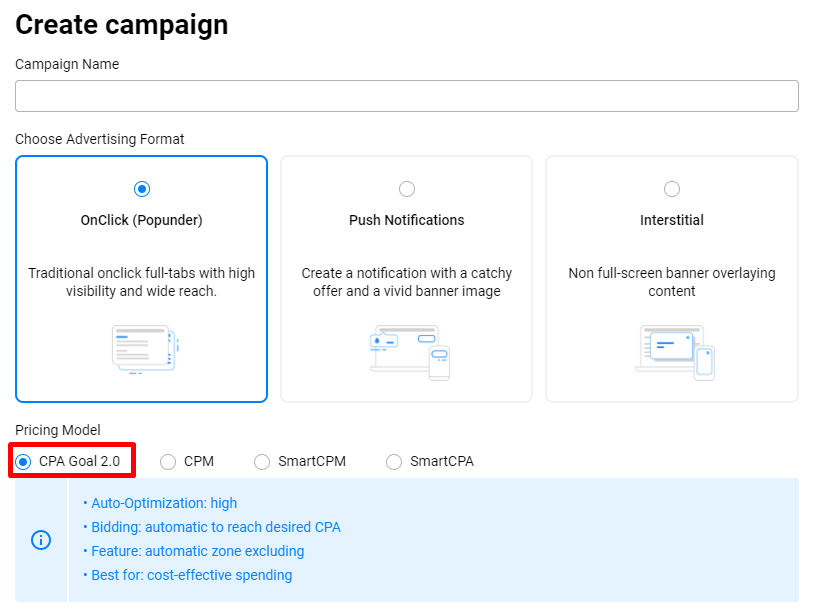 4. Fill in your Target URL (for both formats) and creatives (for push notification or Interstitial campaign). Target URL is the landing page (or URL provided by a third party system) that the user will be directed to.

5. Choose your GEO and define the CPA goal (conversion price).

7. Fill in the details about your campaign's Budget.

Daily Campaign Budget - amount of money you’re willing to spend per day on this campaign.

Total Campaign Budget - amount of money you are planning to spend on this campaign for the entire working period. If your campaign runs out of its total campaign budget, it stops.

You can set the running period manually using the calendar or choose one of our presets: working days or weekends only. Also you can set up a time zone for your campaign according to UTC and choose the dates of the display period (day start and day end). 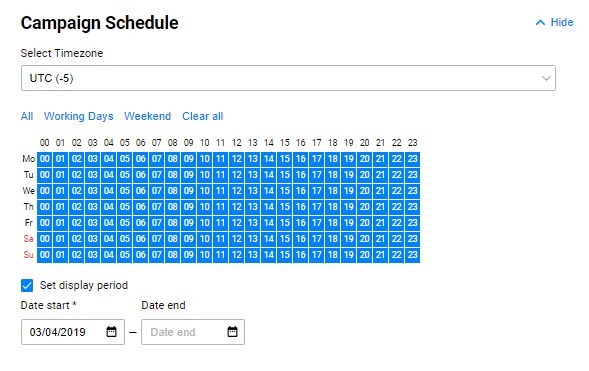 9. Learn your audience and target your campaign properly so it will work cost effectively.

You can target by:

You can also include or exclude Ad Zones (if you already have collected some while/black lists). 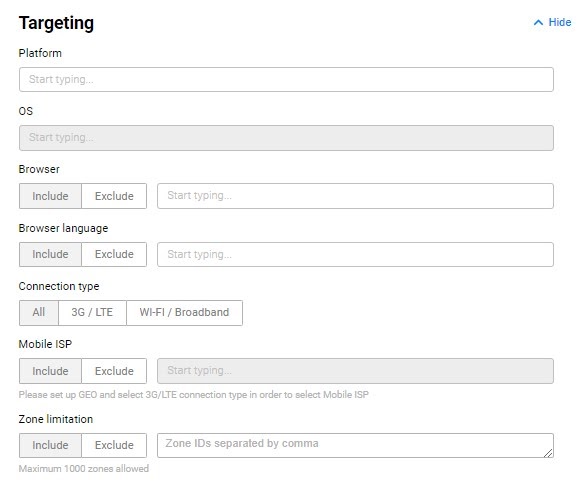 10. You can also collect an audience for retargeting. More info in this article.

11. After you’ve filled in the forms and set the targetings, click "Save and Start".

CPA goal pricing model is available for all ad formats.

What is the budget needed for a test period?

Advertisers usually allocate around $50 for tier-3 GEOs, $100 for tier-1 and tier-2 traffic in daily testing.

The bottom line is, test budgets depend on the offer and targeting. If there is concrete success data about the performance of the offer, many advertisers tend to just launch campaigns with unlimited budgets.

1. Difficulty of the funnel – the harder it is to convert, the bigger budget needs to be allocated in order to get proper testing and draw conclusions. Usually, ‘difficulty’ is reflected in the payouts, so you can use them as a guideline to set a proper test budget.

2. Traffic segment is what matters. The wider your targeting settings are, the more ad placements they include, the more budget testing will need.

3. Keep in mind traffic prices for the geos – whilst $50 may be enough in India, due to how cheap the traffic is, it won’t bring as much traffic in the US since the competitive prices are much higher.

How long is the CPA Goal test period?

You can expect it to last up to 24 hours. But it might require more time. Here’s why.

2. Your funnel (easy or complicated) affects the testing period. Our system needs to get the information about conversions for proper optimization and traffic delivery. So the longer it takes for conversion to happen (deposits, cc-submits, etc), the longer your test period will be.

However, clicks are also used as an additional factor in auto-optimization. So campaigns with a complicated flow can still be successfully auto-optimized with CPA Goal.

Why is my conversion price higher than the desired CPA Goal during the test period?

The auto-optimization is based on the “click” and “conversion” information. To get this info our machine learning algorithm tests your campaign on the best traffic in the system.

1. There can be high competitiveness and higher traffic prices. This results in the CPA price exceeding your CPA Goal during the test. However, after the test period CPA will drop.

2. It may also happen because of your creatives’ or the offer’s low performance. Low CR and CTR lead to fewer clicks & conversions. The algorithm has to lower the bids and keep the test running, trying to get more conversions.

Try re-adjusting your CPA goal and work on your creatives to improve CTR and post-click activity.

If you need any assistance, you can always contact our Support Team, which will be happy to help you 24/7.